SOUTHFIELD, MI – On January 19, 2018, Sommers Schwartz senior shareholder Matthew L. Turner persuaded a jury in Oakland County Circuit Court that their client suffered permanent loss of her dominant right hand resulting from a neurosurgeon’s alleged failure to perform a root compression procedure on the correct area of the patient’s spine. 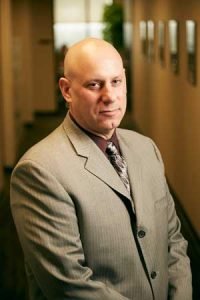 According to the allegations of medical malpractice in Girard v. Perez-Cruet, M.D. et al (Case No. 16-154556-NH), plaintiff Deborah Girard sought treatment from defendants Dr. Miguelangelo J. Perez-Cruet and Michigan Head & Spine Institute on February 14, 2014, at which time she was unable to move her right hand and fingers. Magnetic resonance imaging (MRI) conducted that same day confirmed a bulging disk with moderate to severe narrowing of the cervical disc space at the C7-T1 level of her spine, necessitating a nerve root compression at the C8 disc to relieve the pain and restore hand function. The MRI report clearly stated that the discs at T1-2 through T3-4 were normal, and three subsequent electromyography (EMG) tests showed abnormalities at C5-6, C7-8, and C8-T1, and confirmed the radiculopathy at C8-T1.

Ms. Girard underwent the root compression surgery at Beaumont Hospital in Royal Oak on March 6, 2014, providing signed consent to have Dr. Perez-Cruet perform a “left C7-T1 Anterior Cervical Discectomy, Fusion, Instrumentation.” Despite the express findings and recommendations in the MRI and EMG reports, the surgical records presented at trial indicated that Dr. Perez-Cruet operated at the T1-T2 level – a level of the thoracic spine wholly unrelated to the affected cervical spinal area.

When her condition did not improve in the six months after the surgery, and because of the condescending attitude she claimed Dr. Perez-Cruet exhibited toward her, Ms. Girard sought treatment from a different surgeon who operated on the correct area of her spine. Though her pain significantly improved post-operatively and some hand function was restored, the extended delay caused permanent, irreparable damage. Experts testified at trial that had Dr. Perez-Cruet done the procedure correctly, it would likely have completely restored the use of the patient’s hand.

“As egregious as the Dr. Perez-Cruet’s error was, his behavior toward the patient, attempts to contradict human anatomy, and refusal to even consider settlement was just as bad,” said Mr. Turner. “This poor woman has been forced to learn to write with her left hand, cannot cut her food normally, and cannot hold anything heavier than a gallon of milk in her right hand. We are grateful to the jury for acknowledging her anguish and confirming Dr. Perez-Cruet’s negligence.”

ALERT: Fall Mediation Scheduled With the University of Michigan for Survivors of Dr. Robert Anderson’s Sexual Abuse. Is a Settlement Imminent?
View more posts →
The lawyers and staff of Sommers Schwartz will be working remotely