In 2015, JUUL e-cigarette devices hit the U.S. market. At the time, JUUL was a small start-up company in San Francisco, California. Since then, its growth has been explosive. In just two years, JUUL was worth over $5 billion and controlled the vast majority of the vaping market in the United States.

The number of young adults ages 18 to 21 who tried JUUL increased more than 400 percent from July 2017 to October 2018, according to an in-depth report by the Truth Initiative. Taking cues from big tobacco marketing of the 1950s and 1960s, aggressive marketing and media campaigns to teenagers and young adults led to a new generation of nicotine addicts.

Lawsuits against the company allege that JUUL e-cigarette devices were deceptively marketed to teens and young adults to get them addicted to JUUL vaping products. Sommers Schwartz, a nationally recognized personal injury and class action law firm, is among the firms representing individuals who first became addicted to nicotine by using JUUL products.

What Are Electronic Cigarettes?

Electronic cigarettes, which are also known as e-cigarettes, e-cigs, and vape pens, are sleekly designed to be disguised as writing pens, USB flash drives, and other everyday products that allow users to hide their true purposes.

These devices are battery powered and use a liquid that contacts nicotine, propylene glycol, and glycerin, and various types of flavors. The liquid is heated and produces an odorless aerosol that users inhale, as opposed to traditional smoke from cigarettes. Electronic cigarettes can be activated automatically by taking a puff or pushing a button.

What Are JUUL E-Cigarettes?

JUUL products account for more than 75 percent of the vaping market in the United States. JUUL nicotine delivery systems are known as pods. 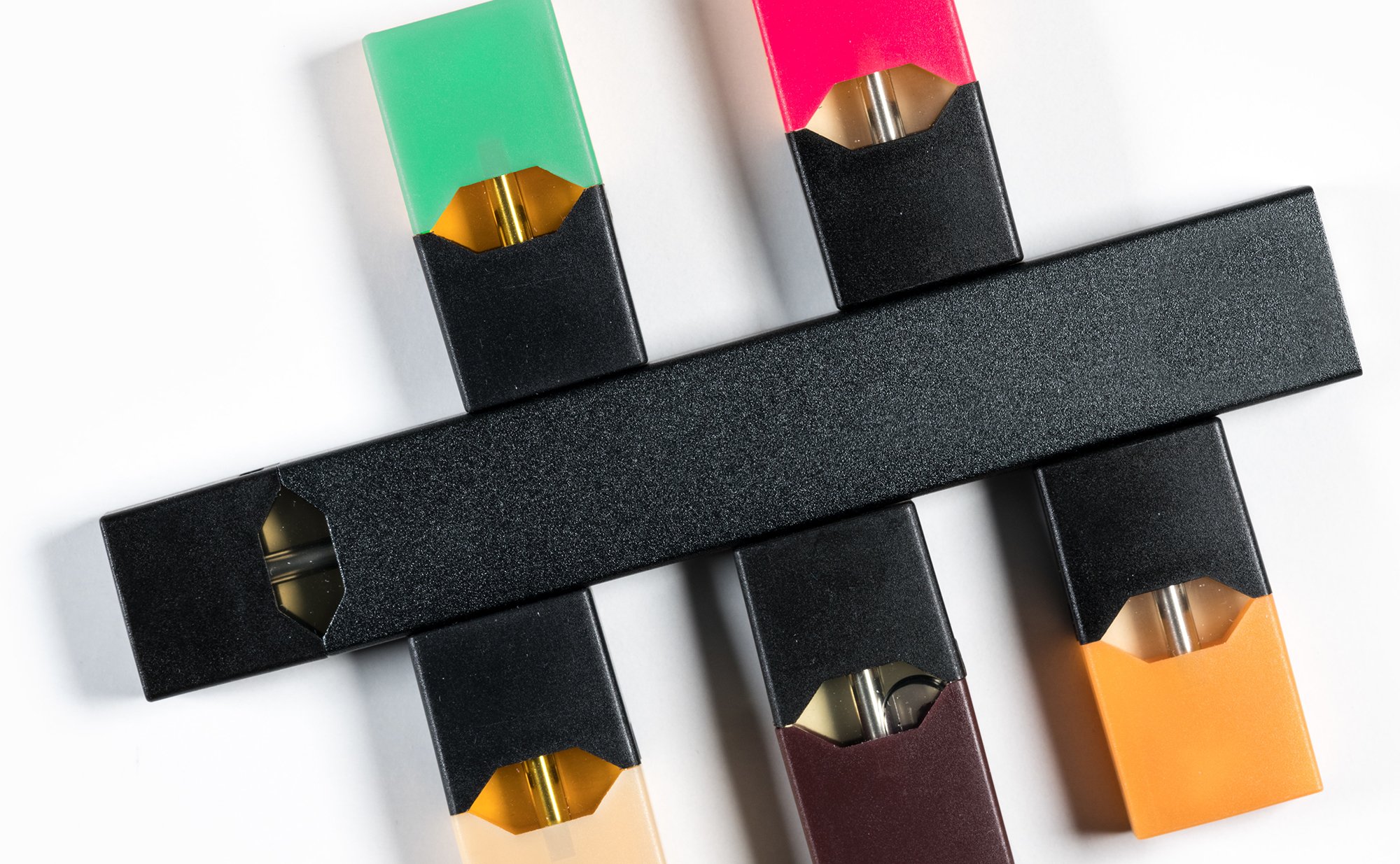 Every individual JUUL pod contains the same amount of nicotine as 20 cigarettes, which the body absorbs at a higher rate than nicotine from traditional cigarettes. When compared with other vaping devices on the market, JUUL pods contain up to twice the concentration of nicotine. JUUL claims its products deliver nicotine 2.7 times faster than other brands, making the risk of addiction very high.

JUUL developed its unique line of vaping devices to look like USB devices, which allowed high and middle schoolers to hide their vape pens in plain sight. Kids can charge their JUULs in their computers in front of unsuspecting teachers.

JUUL also offered a wide variety of flavors designed to appeal to a user’s sweet tooth. Flavors included mango, bubblegum, and crème. While teens could enjoy the taste, the smell to others was odorless, again disguising its use. JUUL insists that its target market was not youth, but traditional cigarette smokers who wanted to quit smoking.

Besides the flavors available, the packaging also featured cartoons, pictures of animals, and school colors. JUUL also used paid influencers and social media, including Instagram and Facebook, to promote their products as a young, hip, healthy device.

JUULs marketing efforts have been so successful among teens and young adults that in just four years, it has reversed the decades-long decreasing trend in youth smoking. In 2018, more than 3.6 million middle and high school students reported that they were using e-cigarettes. The number is even higher, as many kids likely did not self-report.

JUUL E-Cigarettes Have Created a New Generation of Nicotine Addicts

The main ingredient in e-cigarettes is nicotine. Nicotine is a highly addictive substance. It has been shown to have a dangerous effect on the brains of young people. Evidence shows that youth are more vulnerable to nicotine addiction.

A report by the TruthInitiative sheds light on how pervasive vaping is among America’s teens:

The insidious aspect ofJUUL is that a nicotine naïve teen can vape an entire pod in their first use and not experience the typical physical reactions that come with smoking a whole pack of traditional cigarettes. The vapor JUUL does not emit a foul odor, induce coughing, or cause gag reflexes. That allows teens to become addicted quickly.

Many e-cigarette users feel they are partaking in a harmless activity. However, many chemicals in e-cigarettes are harmful to users. In 2018, the Journal of Pediatrics published a report about the carcinogenic effects of the flavoring chemicals in the fruit-flavored vaping juice. Vaping chemicals include formaldehyde (embalming fluid), toluene (a chemical used in adhesives and paint thinners), and acrolein (a chemical used to kill off plant and algae blooms). These chemicals can cause popcorn lung. Symptoms of popcorn lung include coughing, wheezing, and shortness of breath. It is a serious and irreversible lung disease.

In early 2019, reports began circulating about mysterious illnesses connected to e-cigarette use and vaping, including cases of minors and adults hospitalized for severe respiratory illnesses and seizures. To date, a wide range of illnesses and injuries have been associated with JUUL andother e-cigarettes, including:

As of October 2019, the CDC reported 1,080 probable cases of vaping-related illnesses across 48 states and 18 confirmed deaths related to e-cigarette use. The CDC has said that the number of vaping cases are risking at a “brisk pace.”

Up and until 2016, the Food and Drug Administration (FDA) did not regulate e-cigarettes or their sale. Lack of oversight allowed e-cigarette manufacturers to employ aggressive marketing tactics aimed at youth – tactics that traditional cigarette companies have been banned from using for decades.

The FDA has now taken action and announced a series of enforcement actions to try to tamp down the resurgence of tobacco products. The FDA issued more than 1,200 warning letters and fines to retailers who illegally sold JUUL products to minors.

The National Institute on Drug Abuse reports that:

More statistics on e-cigarette use are available from the FDA. The agency reports that:

JULL and other e-cigarettes are not safe, nor were these products marketed just to adults and existing smokers. Instead, e-cigarettes contain quantities of nicotine that far exceed the amount in cigarettes, making addiction and a lifetime of severe health problems more likely. Not only did JUUL and others conceal or downplay the dangerously high nicotine levels in their products, but they also purposefully, deceptively, and illegally targeted minors in their marketing and product development.

The epidemic of e-cigarettes use among teens has alarmed public health officials, doctors, and parents alike, as they see youth struggling with intense nicotine addiction and respiratory illnesses. Legislators and government officials at all levels are calling for investigations and swift action to address this public health crisis. Some states have even tried to ban the sale of flavoring in e-cigarettes.

Those that have been harmed by JUUL e-cigarettes are filing lawsuits seeking compensation for addiction and physical injuries. School districts around the country are also suing JUUL for the expenses they have incurred in combating this epidemic in their schools. It is time to hold JUUL responsible for the damages caused as a result of the company’s false and deceptive marketing.

Injured parties or their loved ones may be entitled to bring alawsuit to seek compensation for the damages and injuries. Compensation can be obtained for economic and non-economic damages like:

If a JUUL e-cigarette has injured you or a loved one, contact Sommers Schwartz, PC, to protect your rights and get the compensation you deserve. Sommers Schwartz senior shareholder, Lisa Esser-Weidenfeller, is investigating and pursuing JUUL addiction and e-cigarette injury claims on behalf of minors and young adults who fell victim to these dangerous and deceptively marketed products.

To learn more about the services we provide and how we can help you pursue a claim for compensation, call 866-335-9517 to schedule a free consultation. Because we work on a contingent-fee basis, you will not receive a bill for our representation unless we win your case.