Sommers Schwartz is pleased to announce that Michigan Lawyers Weekly has chosen Kevin Stoops as one of its “Up & Coming Lawyers” for 2013!

According to the legal publication’s selection criteria, the honor is awarded to attorneys “who are establishing a name for themselves, go above and beyond, and display the ambition, drive, determination and accomplishments that set them apart among their peers — in their first 10 years in practice.”

A savvy courtroom litigator, Kevin’s success on behalf of his clients has generated a solid reputation among both the plaintiffs and defense bar.  Over the course of his relatively short legal career – as compared with other lawyers of similar experience and results – he has become the consummate trial attorney for business, commercial, and employment disputes.

In 2010, Kevin became the youngest shareholder in Sommers Schwartz’s 40-year history, and has risen to senior shareholder and a member of the firm’s Board of Directors, not only participating in the day-to-day management of the organization, but also helping to shape its direction for the future.

Kevin demonstrates his commitment to his colleagues and his profession every day.  In addition to a busy law practice and his leadership roles at the firm, he serves as a Case Evaluator with the Oakland County Circuit Court, a Hearing Panel Member for the State Bar of Michigan’s Attorney Discipline Board, and member of the Board of Directors of the Detroit Metropolitan Bar Association (after previously serving two consecutive two-year terms on Board of Directors of the DMBA’s Barristers Section).  He is also an active member of the American Bar Association, Oakland County Bar Association, National Employment Lawyers Association, and American Association for Justice. 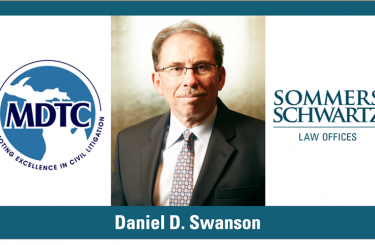